By CHRIS HELGREN
Globe and Mail

Rosalie Silberman Abella is a Supreme Court of Canada justice. This is an excerpt from a recent lecture at Harvard Law School. 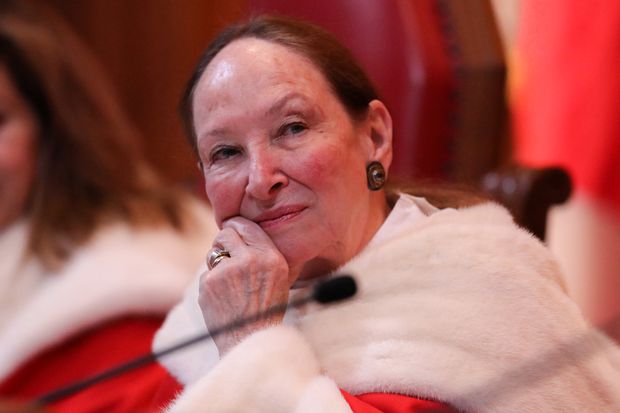 I graduated from law school in 1970. North America had just experienced the social turbulence of the sixties, but I entered a world where there seemed to be a consensus about how to deal with justice issues – expand rights, respect differences and reduce disparity. We were all, I thought, on a unifying trajectory towards fairness. But then we discovered that too many people couldn’t afford us.

When I was in first year university, everyone told me to take philosophy with professor Marcus Long. In the very first class, he asked: “If a tree falls in the middle of a forest and no one hears it, does it make noise?” I turned to my best friend Sharon and said: “I’m outta here. Who cares?!”

Now that I’m older and don’t have the answers to everything the way I thought I did when I was 18, I realize what a wonderfully instructive metaphor Marcus Long’s question is. If you can’t hear something, you don’t know about it, and if you don’t know about it, then it possibly doesn’t exist for you. And if it doesn’t exist for you, there’s no need to do anything about it.

But that doesn’t mean the tree didn’t fall and make noise. And it doesn’t necessarily mean we can ignore it. It may have caused a lot of damage, and the longer you leave that damage, the harder it’ll be to fix. And what’s the noise we’ve been ignoring? The sound of a very angry public.

I’m talking of course about access to justice. But I’m not talking about fees, or billings, or legal aid, or even pro bono. Those are our beloved old standards in the “access to justice” repertoire and I’m sure everyone knows those tunes very well. I have a more fundamental concern: I cannot for the life of me understand why we still resolve civil disputes the way we did more than a century ago.

In a speech to the American Bar Association called The Causes of Popular Dissatisfaction with the Administration of Justice, Roscoe Pound criticized the civil justice system’s trials for being overly fixated on procedure, overly adversarial, too expensive, too long and too out of date. The year was 1906.

1906 was three years after the Wright Brothers’ maiden flight at Kitty Hawk, 10 years after Plessy v. Ferguson told African-Americans that segregation was constitutional, eight years before the most cataclysmic war the world had ever fought, a generation before rural North America became urbanized and two generations before its governments became decidedly distributive.

And yet, with all these profound changes over the last 114 years in how we travel, live, govern and think, none of which would have been possible without fundamental experimentation and reform, we still conduct civil trials almost exactly the same way as we did in 1906. Any good litigator from 1906 could, with a few hours of coaching, feel perfectly at home in today’s courtrooms. Can we say that about any other profession?

Justice may be blind, but the public is not. And the public doesn’t think it should take forever and thousands of dollars to decide where their children should live, whether their employer should have fired them, or whether their accident was compensable. They want their day in court, not their years.

We can’t keep telling the public that this increasingly incomprehensible complicated process is in their interests and for their benefit, because they’re not buying it any more. When we say, “It can’t be done," and the public asks, “Why not?” they want a better reason than, “Because we’ve always done it this way.”

We can’t talk seriously about access to justice without getting serious about how inaccessible the result, not the system, is for most people. Process is the map, lawyers are the drivers, law is the highway and justice is the destination. We’re supposed to be experienced about the best, safest and fastest way to get there. If, much of the time, the public can’t get there because the maps are too complicated, then, as Gertrude Stein said, “There’s no there there.” And if there’s no “there there,” what’s the point of having a whole system to get to where almost no one can afford to go?

So let’s be bold and acknowledge that the public has judged our relationship with incremental change to have been largely Sisyphean. The tinkering at the edges, with reforms like mediation and arbitration, may have been a necessary rehearsal, but it hasn’t exactly been the hit with the public we thought it would be.

It’s time to think about designing a whole new way to deliver justice to ordinary people with ordinary disputes and ordinary bank accounts. That’s what real access to justice needs and that’s what the public is entitled to get. Justice must be seen to be believed. And getting people to believe in justice is what the legal system exists for. It’s time they got what they’re entitled to.