Ontario’s 2009 Green Energy Act: What is the Global Adjustment fee?

It's not just rural Ontario residents feeling the pinch of high hydro bills; businesses are suffering too. As Shirlee Engel reports, one man says his company is in jeopardy before he even gets it off the ground.

A product of Ontario’s 2009 Green Energy Act, the Global Adjustment fee is a charge billed to all hydro customers in the province. 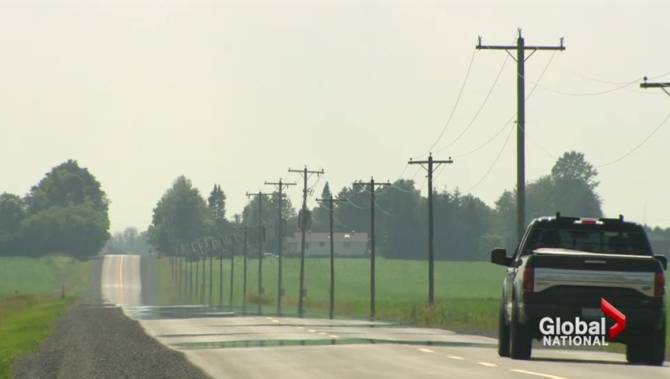 According to data obtained by Global News from the Independent Electricity System Operator (IESO), the organization responsible for managing Ontario’s energy system, residential customers and small businesses in Ontario paid an average of 7.9 cents per kilowatt hour in Global Adjustment fees last year.

So for every $100 in usage that appears on your electricity bill, $77 of that is the Global Adjustment fee. Meaning the cost of electricity use is only $23.

What exactly is included in the Global Adjustment fee?

First, there’s the difference between what the IESO pays energy producers for the electricity they produce, known as the contracted rate, and the actual fair market value of this electricity, known as the Hourly Ontario Energy Price, or HOEP.

Solar producers, many of which signed contracts with the government for as long as 20 or 30 years, were paid as much as 80 cents per kilowatt hour for the energy they produced, despite the fact that fair market value for this energy was the same 2.36 cents per kilowatt hour. Here, too, the 78-cent difference was passed on to consumers.

And while the argument can be made that the Global Adjustment fee simply reflects the true cost of producing reliable, green electricity in the province, this ignores the fact that, in 2015 alone, Ontario sold more than 22.6 billion kilowatt hours of electricity – enough to power 2.5 million homes – to places like New York and Michigan at the fair market price of 2.3 cents per kilowatt hour – generating a loss of more than $1.7 billion for Ontario hydro customers.

So while Ontario customers are required to pay for producing green electricity, utility providers in the United States are able to access this same energy source for a fraction of the cost.

The Global Adjustment fee also includes what’s known as “curtailing,” when the IESO pays energy producers not to produce electricity out of fear too much production could cause stress on the system and result in a blackout.

But when asked not to generate power, electricity producers must still be paid because the Government of Ontario initially agreed to purchase everything the energy producer’s facilities were capable of putting out.

Why conservation won’t make a difference

Over the past seven years, Ontario has signed numerous agreements with energy producers guaranteeing minimum levels of revenue regardless of how much energy they produce.

TransCanada, set to open their Napanee Generating Station later this year, signed an agreement with the Ontario Power Authority in 2012 that guaranteed the company would receive a minimum of $13.7 million per month once the plant comes online – even if they produce zero electricity.

With agreements similar to this in place across the province, Gallant thinks it’s no wonder hydro rates in Ontario continue to rise.

The easiest way to explain it, said Gallant, is that when energy consumption drops due to conservation, the Global Adjustment fee must be increased to make up the difference. So the less power Ontarians use, the higher their electricity costs must be in order to cover the minimum revenues energy producers are guaranteed.